The Future is Already Here

I just received a Google Alert message for my keywords 'garden history' and discovered it was a new comment on the Garden History Society (GHS) website Forum from another garden historian 'stephenha' who has some interesting points to make.  The link takes you to the page but I have taken the liberty of copying Stephen's text below.  I, and I am sure he and the GHS, would value feedback from yous who are interested in garden history, maybe are members of the GHS and also social media users.  Feel free to post comments here or on the Forum page.

Embrace the Future or Stagnate
by stephenha.

'I teach garden history to a wide age range of students. If you can deliver the subject without making it stuffy then I find younger students are interested in it and see the relevance to other subjects such as garden design.

In these modern times getting your message across to younger people is vital. Facebook and Twitter are both modern mediums that most young people use. Organisations and Societies now use Facebook and Twitter to get their message across to a global audience. These mediums are used to raise profile and make a global audience aware that the organisation even exists. Do you think that the time has come to follow suit and the Garden History Society has a Facebook account and even Twitter. Yes you can find a tweet on the lecture series but more is needed. I believe this would be extremley popular and attract followers and new members.

I try to encourage some of my students to join the Garden History Society because I believe that now or in the future they will have a part to play and have something to offer. After all to offer the old cliche, younger people are going to be the future of the society and what is really offered to attract the new blood in?

As much as I like looking at the website it does not set the world on fire and does not say come and join us. Some may think I want to dumb down, some may think I want shiny bright things like attracting magpies which is not the case. I just think the time has come to embrace the new IT age.

I also enjoy recieving my copy of the Journal. But again for some younger students one look at the jounal is enough to turn them off garden history for life. I would like to see essays at different levels to entice people in. Students are not all yet at the academic level of the Journal. I say not yet, but some will be, but by then it may be to late.'
Posted by Toby Musgrave at 16:54 3 comments:


If you want to know where and when gnomes entered the English garden or as well as discover a whole lot more about global garden history, then do come and join my on-line garden history course.

Hosted by My Garden School the course begins on February 02.

So give those little grey cells a work-out, sign up and learn how fun and fascinating garden history is.

Posted by Toby Musgrave at 15:33 No comments:

Another super post from Cambridge Library Collection Blog team featuring a biography of one of my heroes, the feisty Irish writer and proselytizer William Robinson (1838-1935.)

In brief, Robinson was a prime force behind the late 19th century change in garden fashions away from the formality of the High Victorian terrace with its geometric beds and bedding schemes to a revival of hardy plants and a naturalistic style.
As a best-selling author and magazine publisher (Gertrude Jekyll was a regular contributor to The Garden) Robinson, a horticulturist,  was also instrumental in the so-called 'Battle of Styles' in which he was pitted against the architect Sir Reginald Blomfield who also despised the existing style but wanted to move gardening towards a formal revival based on Tudor and Elizabethan styles.  The result was that architect and gardener - Sir Edwin Lutyens and Gertrude Jekyll - proved that the sum was greater than the total of the two parts, and created their  Arts and Crafts masterpieces.

Posted by Toby Musgrave at 14:20 No comments: On the same lines as the last post, another wonderful discovery has been Hortus Penbrochianus.  It is posted on a site called The Visual Telling of Stories, which is itself well worth an explore.

This slim tome by Isaac de Caus (1590-1648) contains a series of etchings in the manner of Callot (c.1645/9) showing the formal garden created at Wilton House by the author from 1632. The website has high res images of all the plates from the book showing the overall layout of the Italian Renaissance-inspired garden and close-ups showing details of certain of the features. Isaac was a French garden designer and architect who arrived in England in 1612 and continued to working in gardens in a similar style to his brother Salomon de Caus.  Isaac's work as an architect can be traced from 1623 and he often acted as assistant to Inigo Jones, including at Covent Garden The design at Wilton, and in particular its ornate parterres, was particularly influential post-Restoration England when the French baroque style epitomised at Versailles and imitated by Charles II became especially fashionable.  Sadly, however, the garden is no longer with us but Wilton does have a fine example of a Capability Brown landscape which features one of three Palladian bridges in England.  Anyone know where the other two are?

Posted by Toby Musgrave at 12:24 No comments:

Sometimes its predictable what results a Google search will return - although when I was researching the history of rubber, I began with the keyword 'rubber' and some (in fact a surprising number) of the results were for websites of what one would call a specialist nature!

Be that as it may, sometimes Google throws up something unexpected and when I was looking for historical images of Stowe landscape this week, I got bonus.  Within the unprepossessing website called 'English for Architecture' is a page called Classical Readings - and what a gold mine it is.

Here are 11 classic garden history texts including Uvedale Price's An Essay on the Picturesque, William Gilpin's Observations on the River Wye and W H Matthews' Mazes and Labyrinths - and most are beautifully illustrated.

Thank you to the late Roberta Barresi for putting the site together.

The Future Assured for Dyffren House

Another good news story - this time from the National Trust.  Last Friday Dyffryn House and Gardens, near Cardiff in South Wales opened to the public for the first time under the management of the National Trust, which has secured the property and grounds on a 50-year lease from the Vale of Glamorgan Council - there is more about the garden via this link.

The Grade II house and 55 acres of Grade I listed gardens were built and crafted by coal magnate, John Cory, in the late 19th Century.

“The gardens are subdivided into a number of garden ‘rooms’ each with its own distinct horticultural character.

“These are surrounded by a pleasure ground of sweeping lawns dotted with statuary, water features, a rockery and kitchen garden and many rare and exceptional trees, including some of the UK’s ‘champions’.

Posted by Toby Musgrave at 11:54 No comments: According to ProLandscaper, the Garden Museum (@GardenMuseumLDN) in south London is seeking an architect to take forward plans to extend the museum.

Posted by Toby Musgrave at 10:32 No comments:

Review of My Garden School

To follow up on my previous post about online / e-learning, please do take a read of this review by The Reckless Gardner (@reckgardener) of My Garden School, which also makes mention of my Garden History course.

Posted by Toby Musgrave at 16:52 No comments: 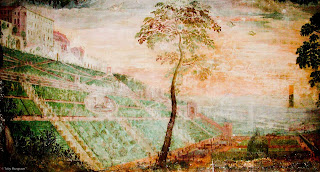 The monthly cycle is beginning again and my on-line garden history course hosted by My Garden School will be beginning on January 05.

So if you are looking to give those little grey cells a work-out after the festive season, why not sign up and learn how fun and fascinating garden history is.

Posted by Toby Musgrave at 12:02 No comments: