Unless your Arabic is up to it the title of this post will mean nothing in and of itself.  But I should like to draw your attention to a fascinating feature from McGill Publications that I just came across while researching early Herbals.

The translation of Kitab fi al-adwiyah al-mufradah is 'The Book of Simple Drugs',  it was written in Al-Andalus (Moorish Spain) in the 12th century by Abu Ja’far al-Ghafiq (d.1165).  One of the foremost Arab physicians and scholars of
his time, Abu Ja’far al-Ghafiq drew heavily on the work of earlier Greek botanists including Dioscorides (1st century CE) and Galen (2nd century CE), and earlier fellow Muslim scholars including Abu Hanifah al-Dinawari (d.895), Abu Bakr Muhammad ibn Zakariya al-Razi (d.925), and Ibn Samajun (d.1001).

The manuscript is unicum - that is to say the only known copy of this work, and  is now housed in the McGill University's Osler Library of the History of Medicine.

The Ghafiqi Project hosted at McGill aims is to produce a three-volume work, a facsimile of the original manuscript, a translation and a collection of scholarly commentary.

Thanks to Val Bott for bringing the following to my attention.  Its always interesting to see how different art forms influence each other, in this case botanical illustration on porcelain decoration. 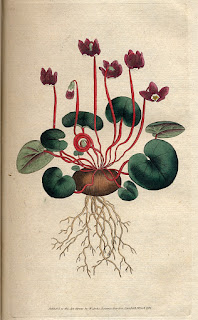 The post by Pam Woolliscroft author of Spode History tells about the botanical designs employed by Spode in the 19th century and which were inspired by the plates in Curtis's Botanical Magazine.  The magazine was founded by William Curtis in 1787.  Samuel  succeeded to the editorship of the magazine in 1827 selling his rights in 1846. Curtis's Botanical Magazine (1801-1920) is downloadable for free from our good friends at the Biodiversity Heritage Library.

Spode is a Stoke-on-Trent based pottery company that was founded by Josiah Spode (1733-1797) in 1770. Josiah Spode earned renown for perfecting under-glaze blue transfer printing in 1783-1784 – a development that led to the launch in 1816 of Spode’s Blue Italian range which has remained in production ever since.  Josiah Spode is also often credited with developing a successful formula for fine bone china.


A modern example of the same would be Royal Copenhagen's beautiful - but expensive - Flora Danica collection.

Posted by Toby Musgrave at 13:23 No comments:

A big thank you to Kate Spirgen and A Garden Life for the interview about Heirloom Fruits & Vegetables.  The article can be read here.

Posted by Toby Musgrave at 12:49 No comments: