The garden team at Quex Park in Kent is planning to restore the Victorian Walled Garden to its former glory. But as is so often the case in such situations there is shortage of records from which to work.

So the team is sending out a plea for help. They are looking for photographs of the walled garden before the hurricane in 1987, memories from anyone who worked in the gardens and information or pictures relating to the garden between 1883 and 1923.

If you can help, please contact the team here, and for more on this story read the article in the Isle of Thanet Gazette.
Posted by Toby Musgrave at 14:30 No comments:

Next year marks the 300th anniversary of the birth of Britain's greatest landscape designer, Lancelot 'Capability' Brown. Certainly his work was the apogee of the eighteenth-century English landscape garden, and I still maintain that if one applies the two Modernist maxims of 'Form follows Function' and 'Less is More' then Brow was not only the first Modernist landscape designer but also by far the most successful.

However in the 232 years since his death poor old Brown has come in mor more than his fair share of stick. In fact vitriol would be a more accurate word. A destroyer of formal gardens, a displacer of villagers are but two of the accusations used to beat him with.

And to our national shame Brown has been deliberately ignored or exorcised from various celebrations of British gardening and garden history. So thank goodness that he is now getting some of the much credit he is due.

Today sees the launch of the 'face' of the Capability Brown Festival 2016 . The portrait of the affable-looking chap himself is by Richard Cosway, probably between 1770 and 1775.

The Festival has been has been funded by a £911,100 grant from the Heritage Lottery Fund with the wider project worth in the region of £1.7million. Much of this represents match funding, and funding in kind, from the Festival’s partners and supporters.

The website has a wholæe host of information about events, projects etc., etc, and here too you can sign up for the latest news.

There are more than 250 sites associated with Brown across England, with a small handful in Wales. They range from small private gardens to larger country estates, and include 12 public parks, some schools and hotels. Many are managed by members of the Historic Houses Association, the National Trust, and English Heritage.

To find an example of Brown's visionary genius near you, check out this interactive map.

Posted by Toby Musgrave at 13:43 No comments:

Just to say I have decided to join the 21st century and now have a Facebook page. Nothing up there just yet except a mugshot, but do drop by and 'Like' if you so feel inclined.
Posted by Toby Musgrave at 10:43 No comments:

Unlocking the Swiss Garden at Shuttleworth in Bedfordshire

Welcome to a Guest Post from Garden Manager Corinne Price who shares a year in the life of this rare Regency gem:

I can’t believe it’s over a year since the completion of the Swiss Garden restoration project.  It was a mammoth 18 month task, hampered by bad weather and the odd technical hiccup, but we got there, and we proudly re-opened the garden to the public in July 2014.

During the £3.6m restoration, the garden’s delicate 13 listed buildings and structures – including 6 listed at Grade II* - underwent careful, specialist conservation.  Traditional materials and techniques were used where possible.
Our two-storey centrepiece, the Swiss Cottage, was re-thatched using water reed from Norfolk, its finials re-gilded with 23 carat gold leaf and the missing or broken rustic decoration replaced.  Conservationists were able to recreate the original decoration by cleverly slicing Monterey pine cones and hazel and willow twigs.

Altogether, over 25,600 shrubs and 8,400 bulbs were planted in 53 beds by horticultural contractors.  We laid 340 metres of path, using 300 tons of gravel and reinstated the lost Regency vistas to reveal the  ‘stage set’ views of the buildings, bridges, urns, arches and other garden features as originally intended in the early 19th century by the garden’s creator, Lord Ongley.

We also added a striking sculpture trail through the woodland, created by chain-saw sculptor Patrick Brown and inspired by ideas suggested by children from seven local schools, based on the garden and its history.

Swiss Garden Today
With the hectic initial restoration behind us, the focus for the garden team has now shifted to returning more of the plants which had been lost from the garden after years of neglect. Craftsman Gardener, Kevin Hilditch, local apprentices Luke Lademan and Aaron Saralli and a growing band of volunteers now maintain the Swiss Garden.

The stunning Grade II* listed Grotto & Fernery had 4,300 panes of glass replaced with hand-cut, handmade cyclinder glass during the restoration and its interior has now been replanted with plants. In the Pulhamite-lined tunnels installed by the Swiss Garden’s Victorian owner, a selection of ferns which can deal with the lack of light have been popped into the planting pockets and are already beginning to thrive.  They include Adiantum, Asplenium, Dryopteris, Polypodium and Polystichum as base planting, with added interest in the form of different frond shapes - for instance ‘Hart’s Tongue’ ferns, the parsley-like Athyrium felix-femina 'Lady in lace’ and Cyrtomium fortunei  with its sickle-shaped pinnae.  Also included are some of the smaller varieties of hostas.

The tunnels open into the Regency conservatory area – which is much lighter, brighter and warmer.  Here we were able to add more colour and four large Strelitzia reginae, bought as mature plants and already flowering, act as a vibrant centrepiece.  The strong architectural form of this plant contrasts beautifully with the more delicate fronds of the tree ferns and the addition of Streptocarpus and further light-tolerant ferns add more variety to the mix.   Wisteria sinensis, which was previously trained along wires to arch across these beautifully glazed ‘arms’ of the Grotto & Fernery, have also been replaced.

Outside, the garden now boasts more ferns and ground cover plants in the steep banks leading down to the Grotto & Fernery.  The ground-cover plants are helping us with the maintenance of this challenging area – it is dry, very steep and difficult to weed!  A base planting of hardy staples such as Geranium, Digitalis, Brunnera and Alchemilla has been embellished with splashes of Vinca, Viola odorata and Omphalodes cappadocia.   Bulbs also play an important part.  We aimed for a fairly naturalistic planting style, with plenty of fern material to connect this area to the Grotto & Fernery while also providing a functional and dense ‘mulch’ of ground cover plants to assist with the retention of moisture and to curtail weed growth.

Elsewhere in the garden, the Floral, Pond Cascade and Chapel Arches now host a selection of newly planted rambling rose and Clematis varieties, and future plans include the addition of a series of ‘intense horticultural moments’ into the garden’s main series of planted beds, to break up the shrub planting and offer further colour and vibrancy.

Restoration of the 9-acre Swiss Garden has transported it back to its Regency appearance, when its creator, Lord Robert Henley Ongley dropped his ‘alpine’ landscape, complete with tumbling water and grassy slopes into its unlikely, previously flat, Bedfordshire setting.  With its buildings rescued from decay and its meandering paths, water features and vistas looking very much as they once did, the past year has seen us build on this structure by adding the finishing touches in the form of the plants which soften its lovely features and once again make it the magical place it once was.

‘Quaint’, ‘quirky’, ‘hidden gem’ and 'fairyland' - words and phrases that may seem a bit clichéd, but as the most complete surviving example of a Regency garden in Britain, we think Swiss Garden justifies them all!  One thing is for certain - at the Swiss Garden, you will discover a little oasis of charm and tranquillity which, along with our three resident peacocks, makes for a memorable visit.

Posted by Toby Musgrave at 11:27 No comments: 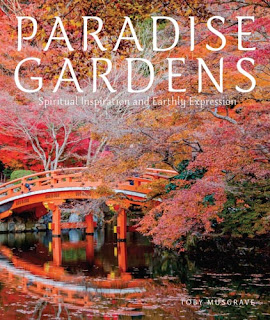 Plants and gardens have been, and in many cases continue to be, cornerstones of religions. Plants imbued with symbolism and gardens created as an earthly expression of a paradisaical afterlife.

Think about it - the Tree of Knowledge of Good and Evil with its 'apple' (I know, the garden in Eden is supposed to have been a real place on Earth not an afterlife concept), the chahar bagh form of the Islamic garden, all those great Ancient Greek myths, the Epic of Gilgamesh, the lotus in Buddhism and the Island of the Blessed in Taoist mythology, etc., etc., etc.

So, my splendid new tome, Paradise Gardens is the story of plants and gardens within seventeen different global religions over a five millennia time frame. And, even though I say it myself it is a fascinating story. Moreover many of the religio-garden forms have been and are still an inspiration for secular gardens the world over.

For some more information about the book, check out its Amazon page....

Posted by Toby Musgrave at 12:00 No comments:

Back to School Offer 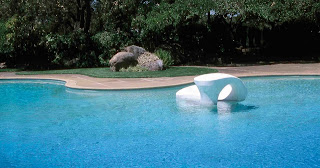 As you likely know I teach a couple of online courses at My Garden School. One entitled Garden History, the other Heritage / Heirloom Fruits and Vegetables.

Now that its back to school time, there is 15% discount offer on these  - and all courses run by My Garden School.

Just click on this link to take advantage - offer runs until end of October.

And I'll very much look forward to meeting you in the virtual classroom.

Posted by Toby Musgrave at 11:46 No comments: