Founded in 1992 and just celebrating its 20th anniversary, the mission of Library of American Landscape History (LALH) 'is to foster understanding of the fine art of landscape architecture and appreciation for North America’s richly varied landscape heritage through LALH books, exhibitions, and online resources.'

Written by leading historians in the field the LALH publishes books about significant North American landscapes and the people who created them.  They are are informative, engaging, and affordably priced. For example, Graceland Cemetery, a design history by Christopher Vernon explores Graceland Cemetery in Chicago which was founded in 1860 and developed over several decades by a series of landscape gardeners whose reputations today figure among the most important in the field.

Posted by Toby Musgrave at 22:09 No comments:

Those kind folks at My Garden School asked if I would guest post on their blog about one of my favourite topic:  those forgotten heroes of horticulture, the plant hunters. So here is it is - hope you enjoy it and please do send me any feedback you have.

Also, just a reminder that my online garden history begins on 03 November, and you can find more information and details on how to book here.

Posted by Toby Musgrave at 15:30 No comments:

Another great post from Deb Wiles on her blog, Got Soil? about the ever-fascinating Vauxhall Pleasure Gardens - well worth a read.

Posted by Toby Musgrave at 17:30 No comments:

A nice piece in The Washington Post on the John Bartram Garden in Philadelphia, and the impact of the man and his work. Posted by Toby Musgrave at 12:09 No comments:

Thanks to Karen Platt who is reviewing my garden history course.  She is posting about it on her blog, so do take a look and see what she has to say...

Posted by Toby Musgrave at 17:31 No comments:

Genius loci - the ‘sense of place’

This week is being kicked off with another guest post, this time from Clare Hickman who addresses the subject of the Genius loci...

Something that has always struck me over the last decade of garden visiting has been the ‘sense of place’ that some gardens have. It is one of those indefinable characteristics that give some landscapes an emotional resonance beyond a visual or more sensory appreciation. Take Lyveden New Bield near Corby in Northamptonshire as an example.

Lyveden is an unfinished late sixteenth century garden building with a watery landscape, also only partially constructed, created by Sir Thomas Tresham as a declaration of his Catholic faith – a risky business under the reign of Elizabeth I. Now looked after by the National Trust, this is a landscape perched on the top of a hill with an orchard, mounds, semi-completed moats and areas of woodland. It is not a floral garden or an exotic collection of trees yet there is something about the space which always takes my breath away. I can’t really define what it is and I sometimes wonder if this is just my very personal response – although I have taken enough students and other garden historians to the site over the years to think that there is something else about the site.

Maybe it is its scale. Not unlike historic Japanese and Chinese gardens, which use a technique known as ‘shakkei’ or borrowed landscape, it is constructed of scaled down hills, lakes and forests. As a garden adventurer you get to explore a miniature world with its snail mounts and waterways.

The art of the garden designer is perhaps to create new worlds which in some way are reflections of the wider landscape around us. ‘Capability’ Brown with his rolling lawns, lakes and shelter belts achieved a similar scaled-down and tidied up version of the English landscape.
More recently the snail mounds and lakes created by the late Maggie Keswick and Charles Jencks at the Garden of Cosmic Speculation in Scotland also fulfill that desire for the elements of land, water and sky on a human scale.

For me Lyveden, for whatever reason, is where these elements coalesce and create an emotionally powerful space. As an academic I tend to use the term ‘therapeutic landscapes’ to talk about gardens that either are or used to be associated with medical institutions. On a personal level I would also the term to describe the effect places such as Lyveden have on me – therapeutic and rejuvenating landscapes.

Posted by Toby Musgrave at 11:14 No comments:

I am very proud to announce the first (of what I hope will be many) guest posts on this blog.  Today's contributor is Sarah Wilson (@swilson09 on Twitter) and I am particularly interested in the subject as my aunt worked for a time as a gardener at Great Dixter.  Take it away, Sarah....

The historic Great Barn and 19th-century Oast Houses at Great Dixter have been opened to the public for the first time ever this month. The barn, originally used for storing and processing crops, was built by local nobleman Robert de Etchingham and dates back 500 years. The oast houses, used for drying hops before they were pressed into sacks, were last used in 1938.

The buildings have been carefully restored by knowledgeable craftsmen to ensure the character and authenticity of the structures remains. The interiors are stripped down and unadorned to allow visitors to see the skeletons of the buildings and appreciate the construction methods used to create them, including the wattle and daub and weatherboarding of the walls. The original floor has been recreated in the Great Barn and some of the original oak frame timbers remain.

The house and outbuildings have proved to be a treasure trove of artefacts, a testament to the waste-not-want-not attitude of Christopher Lloyd. Head Gardener, Fergus Garrett, can tell many anecdotes about the various gardening paraphernalia, pre-World War II foodstuffs and other odds and ends that have been unearthed at Great Dixter. The newly opened buildings provide a fitting home to display some of these historic items. 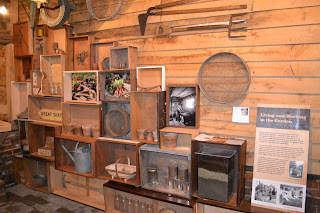 The Lloyd family and the subsequent caretakers of Great Dixter have worked ceaselessly to preserve the essence of the site and to maintain the link with its farming origins. The house and gardens are noted for their importance as an example of the Arts & Crafts style, but The Great Barn and Oast Houses provide the public with an insight into the history of the estate before the Lloyds took possession and how this history influenced the way in which it was developed. Further details can be found on the Great Dixter website.

The Innisfree Garden in Millbrook, NY is a 150-acre public garden which was originally the private domain of Walter and Marion Beck, who in the 1920s purchased several hundred acres of Millbrook as a summer residence.

In 1938 the Becks met landscape architect Lester Collins who was influenced by Modern architect Walter Gropius and Modern garden designer Christopher Tunnard, and his experiences of visiting gardens in Japan and China.  Together with the Becks Collins designed what is described by Innisfree Garden as 'the ancient art of Chinese landscape design has been reinterpreted to create, without recourse to imitation, a unique American garden.'

There is an extended history of the gardens by The Cultural Landscape Foundation (TCLF)  Established in 1998 TCLF aims to educate people about historic landscapes through training programs, partnering with local groups and publicity for at-risk space.

Both thankfully and sadly Innisfree Garden is on on TCLF  Landslide listing for 2012.  Landslide comprises twelve examples of threatened and at-risk landscapes, which this year also includes the Hannah Carter Japanese Garden and Pennsylvania Avenue.

Landslide will be officially announced this Thursday at the Stewardship of Central Park's Woodlands Launch Reception, a TCLF event in association with New York's Central Park Conservancy.

Posted by Toby Musgrave at 15:29 No comments:

Take a break and enjoy this video lecture discussing the United State's third President in a role he seems to have considered as important as leading a new nation.  That of vegetable gardener on his Monticello estate. 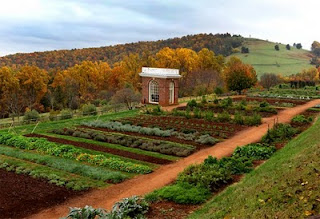 To quote the Cornell University website: 'Thomas Jefferson wrote that "the greatest service which can be rendered any country is to add a useful plant to its culture," and his 1,000-foot-long, terraced vegetable garden at Monticello was an experimental laboratory, an Ellis Island of 330 varieties of vegetables.

Jefferson himself was a seedy missionary of new and unusual novelties, and his legacy in food, wine, and gardening provides us today with a profound model in vegetable cuisine, sustainable horticulture, and a passion for the earth.

This was Jefferson's personal garden, but it was also a family garden where he sowed cabbage seed with his daughter, Martha; a community garden where Jefferson competed in friendly "pea competitions" with his neighbors; a national garden of seeds from the Lewis and Clark expedition, the Spanish southwest, and America's finest plantsmen; and an international garden of vegetables from around the globe.

Thomas Jefferson liked to eat vegetables, which "constitute my principal diet," and his role in linking the garden with the kitchen into a cuisine defined as "half French, half Virginian" was a pioneering concept in the history of American food.

Peter Hatch examines a full sample of Jefferson's favorite vegetables, from salsify to peas, by discussing both how they were grown and prepared at Monticello but also their history and place in the horticultural world of early nineteenth-century Virginia. Finally, Hatch explores the precedent-setting vegetable garden restoration of the early 1980's and the compelling Jefferson legacy in food and gardening today.’

The lecture was part of the 2012 Cornell Plantations Lecture Series.

Posted by Toby Musgrave at 13:01 No comments:

Gardens Have a Purpose

One of the reasons that garden history so fascinated me is that gardens reach into all aspects of culture and society.  They are integral to why and who we are.  In academic parlance they are the epitome of an interdisciplinary subject.

Take the example of the tea gardens made in London - particularly the Vauxhall Tea Gardens and the more upper market Ranelagh Garens which are the subject of this great post by 'Two Nerdy History Girls'.

These gardens were so much more than gardens - they were the location for trans-social interactions, the location for romantic assignations without chaperone, a stage for mass entertainments, the beginnings of mass catering, pioneering outdoor lighting, advertising, and the logistics.  All in all,  most complex and profitable business ventures.

So when you think of or visit historic gardens look beyond the obvious and explore the fascinating ways in which gardens have shaped and been shaped by cultures, societies, fashions and so much more!
Posted by Toby Musgrave at 21:00 No comments: 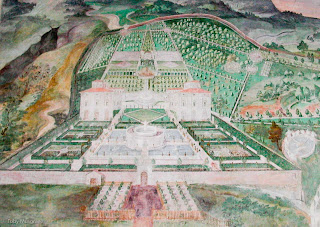 After a most successful inauguration, my month-long garden history course hosted by My Garden School will be running again as of October 6.

The course comprises four weekly lectures and assignments, and if you are  interested in participating, please do take a look at the course outline, view the taster of the first lecture and sign up.


And even if you are not tempted (heaven forbid!) I would be most grateful if you could help spread the word.  Many thanks!

Posted by Toby Musgrave at 11:06 No comments: