Today's guest post is by Debs Wiles.  Thank you @dawiles.

Recently a friend who is starting up a new landscaping business asked my opinion on a logo design. My friend's mission is to create and maintain gardens that appeal to all of our five senses and he was sketching out logos that contained images pertaining to each sense. Naturally, I immediately thought of a Quincunx, a geometric pattern of five points arranged on a cross.

The term comes from the Latin quinque + uncia, literally translating to “five ounces”. It has applications in the sciences of botany, astronomy, and modern computer science, not to mention the practices of architecture, agriculture, horticulture, and a style of geometric decorative inlay stonework called Cosmati, or Cosmatesque (Harry Potter fans may recognize this style on the inlaid marble floors of Gringotts Bank).

Sir Thomas Browne (above), a 17th century luminary, wrote a lengthy and formidable essay on the Quincunx (The Garden of Cyrus also entitled The Quincunciall, Lozenge, or Network Plantations of the Ancients, naturally, artificially, mystically considered, 1658). In it he quotes Quintilian, a 1st century Roman rhetorician who uses the term in his Institutio Oratoria, first published c.95 AD: “Quid [illo] quincunce speciosius, qui, in quamcumque partem spectaveris, rectus est?" which translates roughly, "What is more beautiful than the quincunx, that, from whatever direction you regard it, presents straight lines?" In context, Quintilian is discussing beauty and utility and writes, “Shall not beauty, then, it may be asked, be regarded in the planting of fruit trees? Undoubtedly; I should arrange my trees in a certain order, and observe regular intervals between them.” He recognizes that planting trees at regular intervals is also advantageous to their growth and health “as each of them then attracts an equal portion of the juices of the soil...”.

Browne's work recounts the military conquests of Cyrus the Great, founder of the Achaemenid Empire, and especially his achievements in gardening, crediting him with the creation of the Hanging Gardens of Babylon. Cyrus was “not only a Lord of Gardens, but a manual planter thereof; disposing his trees like his armies in regular ordination. So that while old Laertas hath found a name in Homer for pruning hedges, and clearing away thorns and briars; while King Attalus lives for his poisonous plantations of Aconites, Henbane, Hellebore, and plants hardly admitted with the walls of Paradise; While many of the Ancients do poorly live in the single names of Vegetables; All stories do look upon Cyrus, as the splendid and regular planter”.

A recurring theme in Browne is the regularity created by the quincunx pattern which in Roman times symbolized an orderly world, something Romans were very keen on. The quincunx is still the basis for planting an orchard today and in the Middle Ages, it was one of the patterns used for planting medicinal or exotic plants. In Christianity it symbolized the five wounds of Christ on the cross and a sanctified universe. The arrangement of the cross-in-square used in church architecture from the early 9th to 13th centuries was often expressed three dimensionally – a larger central bay surmounted with a dome framed by four smaller bays likewise surmounted by smaller domes. It's an arrangement that can be seen in 18th century garden follies inspired by the Italian Renaissance, such as the Temple of Four Winds at Castle Howard, with the central bay surrounded by four porticoes.
Browne asserts that the term quincunx was “in use long before Varro”, a 1st century BC Roman scholar. Varro was widely read by Quintilius and also by Pliny the Elder, who wrote extensively on nature and the ideal arrangement for gardens. Vitruvius read Varro and DaVinci read Vitruvius. 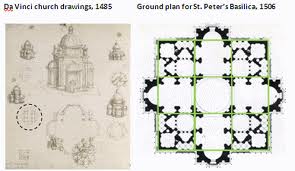 Students of art and architecture during the Italian Renaissance read them all, and applied their theories to their creations. Through these early scholars and down through history, the quincunx is still in use in garden design today. When you see the rows of an orchard planted with military precision, or a mass of bedding plants neatly laid out waiting to be installed, you are most likely looking at a quincunx.