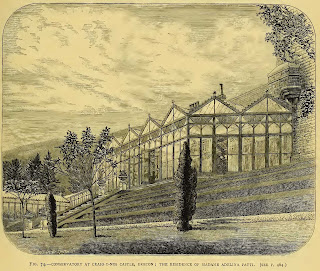 According to WalesOnline, a row has blown up over the state of the 16 ha (40 acres) of landscaped grounds - now a Country Park - that surround Craig Y Nos Castle in Brecon.
The gardens were the pride and joy of the Victorian opera star Adelina Patti and were described thus in the April 08 1882 issue of the Gardeners’ Chronicle (vol.17, p.464) from which the illustration is also taken:
'The gardens, and all that pertain thereto, are entirely original, and have been formed and constructed from the plans and under the superintendence of Mr. William Barron, Garden Architect, &c., Sketty, Swansea, to whom Madame Patti intrusted the work. Mr. Barron is, we understand, a pupil of the late Sir J. Paxton, at Chatsworth, nearly forty years ago, but is no old-school practitioner— on the contrary, a glance at the light, elegant, and beautiful designs here shown will, we venture to say, place him as one of the first of the day.  A special feature here are the steep grassy slopes or terraces in front of the Castle ; these, although not yet completed, were a work of no mean character - the quantity of soil required in their formation being astonishing. How much better these grassy slopes look than the ordinary inevitable terrace walling, and how much less costly ! We have before noted Mr. Barron's mode of forming these grassy slopes in other parts of the country, and it appears to us his style is particularly pleasing, inexpensive, and quite unique. The conservatory attached to the Castle measures 80 feet by 27, having a ridge-and-furrow roof, the side-lights with glass near to the ground all forming doors that maybe opened at pleasure to go out on the terrace at any point.'The current owner of the castle, Martin Gover has taken the owners of the park - Brecon Beacons National Park Authority (BBNPA), to task for their lack of maintenance and care saying that the park is ‘It is more a wasteland of debris than a park.    Tourism operator Ashford Price has weighed in claiming that the park would be ‘hardly worthy of a third world state’.  For their part BBNPA says it is relying heavily on volunteers to maintain the park  in the current tough economic times and has given assurances that it values the park highly.A sad state of affairs and we will await further developments.