Only for the Heart’s Amusement

I am absolutely delighted to be putting up a guest post from landscape architect and garden designer Julia Fogg (@fogg_julia) who also has a super blog of her own - Terrain.  Thank you Julia, and over to you...

The image on the template of this blog resurrected thoughts from a visit to Bosco Sacro at Bomarzo and Villa Lante at Bagnaia a while ago.  Both are described as  ‘Mannerist’ and have other similarities such as location – only 20 kms apart – and  their construction in mid-16C, if we believe the data. Also there is some thought that they were designed by Vignola although this is not conclusive. One, Sacro Bosco, was commissioned by a soldier Duke and, the other, by a cardinal.

Certainly, both these gardens are about exaggeration in composition. They also have many expected landscape features in common but they are poles apart in character.


Both gardens would be filled by guests enjoying music, comedy and dancing and it’s  easy to imagine the theatricality of night time revels and masques lit with flaming torches instilling intrigue, anticipation with their flickering shadows.

But the differences in treatment of these two gardens couldn’t be more obvious.

In the Sacro Bosco, there are no visible straight lines, so no clipped hedging, no borders and no parterres. It is based on the story of a life – a journey through life of things seen and experienced, It is developed from a knowledge of the humanities creating a metamorphosis shown in the figures and sculptures struggling out from rock and earth. 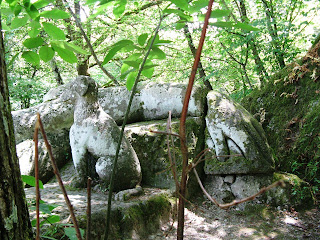 The statues have an extreme physicality. They could equally be described as art but also as Disney scale tricks. They contribute to the sense of trepidation felt here, sometimes menace but the overriding atmosphere is of an earthly love formed with violence and passion. The garden was conceived as a memorial for the Duke’s wife. 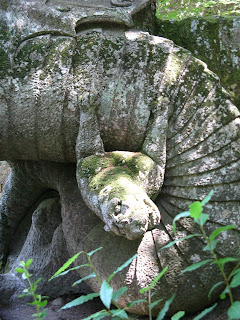 Villa Lante is an open stage. The prevailing sense is of organisation. Strict patterns of terraces and pathway network convey a measured crispness. The proportions are perfect and confident. Here there is no sense of playing with scale – all is correct – although surprises and excitement are ensured too. So a garden for promenading and for ‘la passeggiata’, for ambassadors, dukes and hostesses with grandeur and largesse but also maybe a hidden sense of secrecy and the potential for voyeurism.

Both these gardens could be described as playgrounds but totally contrasting in their sense of individuality and inner message. So tagging gardens – whether ‘political’, ‘gardenesque’, ‘wild’, ‘romantic’ or ‘contemporary’ to highlight just a few – and encapsulate within a known style is unhelpful. My conclusion is that it’s all about the atmosphere. And finally, a footnote to me as a designer, to learn from these examples and endeavour to create at least one part of the garden, if not the whole site, where the character is inherently sexy.